From Expert's Lens : Report on Indian Sudoku Championship 2018 by Kishore

I travelled along with Pranav and reached Mumbai via Spice Jet on the morning of 18th. After a quick breakfast at the food court near the airport, we caught an Ola auto and reached the venue around 9:00 AM. Before the event commenced, I was sure that the top 3 will be Rohan, Prasanna and Rishi in some order with fight for the 4th place between myself and Pranav.
I also had the confidence that I would edge out Pranav which was based on my performance vis-a-vis his in GPs and other online contests. How wrong I was …….

Now on to the event !

Round 1 : Classics (350 points /35 mins)
This round had 10 classics to be solved in 35mins.I scored 249 in ISC 2017 which had 12 classics worth 400 points to be solved in 35 mins and I finished the classic round in Asian Sudoku Championship 2018 in February with 8 mins to spare. So, I wasn’t absolutely sure how this round would go for me. As things panned out, I started from the last classic (60 points) and made quick work of it with the timer reading 30:10 (4:50 to solve it).Confident with my start, I moved on to the 9th classic (50 Points) which spoiled the entire round somewhat for me.

I got stuck in that failing to spot some crucial hidden pairs in boxes 4 and 5 without which you can bang your head without going anywhere. I went for a bifurcation, got stuck again, bifurcated again and reached a contradiction towards the very end of the solve with the timer reading 21 (something).I decided to drop it and move on to the rest of the classics which I did complete.
I scored 300/350. Pranav and Prasanna finished the round with 3 mins bonus scoring a solid 380.Rohan just finishing the round getting 350 points and Rishi ended up making 305.

Round 2 : Usual Suspects(750 Points/75 mins)
There was an interesting mix of variants in this round with 750 points on offer at a duration of 75 mins. I sticked to my approach of starting from the higher pointers (Little killer 130 points was the highest) finished it in 12 mins and started completing one by one in order. I was doing this round cautiously in order to avoid making any errors and that must have affected my speed.

When I approached the Slot machine (100 pointer), I remembered the comment by Aashay Patil in the corner of my mind that slot machine is something which he wouldn’t attempt. That biased me somehow and I started doing other lower pointers and finished with a decent score of 605/750. Later, I got to know that there were no demons in slot machine and a 100 could have been scored in that.

Anyways, Rohan topped this round finishing with 3 min bonus for a whopping 780 points. Pranav continued on his good run to finish with 620. Prasanna apparently broke a lot of sudokus to finish with a somewhat lacklustre 540 and Rishi scored 570.

Round 3 : Battling the Samurai (400 points/40 min)
This round turned out to be the disaster of the day for me. It had 2 samurai sudokus (Classic samurai and a Variant samurai).I started great finishing the classic samurai in just over a 15 mins and proceeded to the variant samurai .The kropki in the variant samurai had a black dot missing between 3 and 6. Apparently, this part does not affect your solve if you solve it using classic rules. But being the guy I am, I use the vice versa rule of variants a lot and kept breaking this. I checked repeatedly to make use that I wasn’t making any errors.

To compound to this conundrum, Rohan, Rishi, Prasanna and Pranav (yes all of them !) submitted before me. So, I got convinced that the fault was on my part and kept solving and kept ending with 3 and 6 edge adjacent without a black dot. I became desperate and for a fleeting moment, I thought that I won’t make it to the A-team. I would equate this round to my experience in WSC 2015 Round 4 (which had a totally puzzle based Sudoku (dumb if you ask me) with people shouting finish all over the place and me ending with zero eventually after which I escaped the competition hall and hid myself from my team somewhere in the lobby disgusted and angry with my performance). But, somehow, I gained composure and went on to solve the rest of the variants feeling unsure of my skills, finished them and came on to kropki, forced myself to ignore the 3 and 6 , solved and submitted it with 2 mins left. (Doing that wasn’t easy at all. I am telling you).All my close competitors mentioned above had all submitted 10-15 mins ahead of me which translates to a 100-150 point lead.

After the round, I got a look at the solution booklet through Ramesh (one of the main organizers) and guess what?! I found a printing error .There wasn’t a black dot between 3 and 6.What kicked me in the gut was that none of Rohan, Pranav, Prasanna and apparently Rishi spotted this error or get affected by this .I literally felt like choking those guys to death (yeah you read that right!) for not spotting that error and leaving me in the lurch which made me ask the question : oh god why ONLY me???? I have to add here that Rishi might have actually spotted the error during the solve but he ended up submitting atleast 10 mins ahead of me anyway.
Eventually after much discussion, the organizers decided to scrap the round.

Round 4 : Centrally Linked (600 Points, 60 mins)
This round had 9 sudokus (3 with identical 5th row, 3 with identical 5th column and 3 with identical 5th box) which was upto solvers to determine and complete. With my focus and my confidence completely shattered from the previous round (note that I wasn’t aware at this point that R3 would be scrapped eventually) I started slowly and even more cautiously to avoid errors. I ended up finishing with 11 min bonus and got 710 points owing to my slow speed and depleted confidence. Rohan nailed it with 28 min bonus getting 880, Prasanna 800, Pranav achieving partial bonus for a single cell error getting 692, and Rishi scoring a 5 min bonus making 660.
Classic Sudoku master (event identical to the recreational one at WSC 2017) :
Frustrated with R3 (at this point it still wasn’t known what will happen to R3), I decided to skip the event, sat on a chair in the last row and it was at the last minute due to insistence from my buddy Varun that I went and occupied my table seconds before the knockout match started. Eventually, I went on to win the Classic Sudoku master title for the 3rd consecutive year .I owe it to a large part, the solve on flex boards as the guys I beat in semi-final (Pranav) and  final (Rohan) can beat me on paper any day and to Varun for making me participate.

From left to right : After winning Classic Sudoku master in 2016,2017 & 2018
Conclusion :
I ended 4th on the leader board with 1703 points making the A-team after a tough race although I am not sure at the time of writing this report concerning my participation in WSC/WPC. Rohan killed the contest with 2109 points (I always feel that he does extremely well in Indian contests but during world championships, on usually 2nd days, he sub-performs costing him a top 10 spot which may be due to fatigue. Case in point is WSC 2015 where he was 5th after day 1 but ended up being 14th), Prasanna 2nd at 1819 points, Pranav 3rd at 1766 points falling behind a little because of the error in R4 and Rishi fell out of top 4 ending 5th with 1633 points.
Full results can be viewed here : http://logicmastersindia.com/forum/forums/thread-view.asp?tid=1532&posts=52&mid=25435#M25435
Feedback, opinion and afterthoughts :
I really enjoyed the event even though the day was very intense and nerve wracking for me. However, it goes without saying that the day was marred by the error in Round 3 and the subsequent scrapping of it. While, I am sure the organizers and testers would have put in their dedicated effort and made sure to avoid any errors, it is utmost important to ensure that the event is free of any broken sudokus no matter what it takes as it is usually things like these which restore faith in an event.
Kudos to Ramesh and Purvi for running the event splendidly (from the food to the venue to their amicable nature, everything was so perfect!) and a big and hearty thanks to Swaroop who rode the chariot this time behind the scene (arranging the sudokus, puzzles etc.,).Thanks to all authors (Bram, Nikola, Tawan, Rakesh and Hemant) for constructing absolutely brilliant and fun sudokus and to everyone else who volunteered for the event.
So that is it. I am somewhat satisfied with my 4th position having beaten squarely by Pranav. It’s never a good feeling, if someone behind you in online contests suddenly starts to improve, overtake you and beats you convincingly offline, in which case you start beginning to doubt your own abilities. In this context, I can somewhat empathise with Rishi as he too got ousted in TSC 2017 as well as ISC 2018 by the same 2 (me and Pranav).But that’s how things are and learning to fight and adapt each day is very important not only in sudokus but life too  !
If you have reached this point, I l take it that you found my report interesting and thanks for reading it patiently ! Thanks Gaurav for letting me publish this report in your blog. 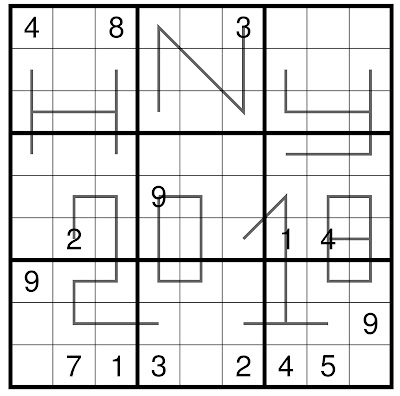 Place the digits 1-9 into each row, column and boldly marked area so that they all contain each digit once. Additionally marked lines should contain consecutive block of digits in any order. 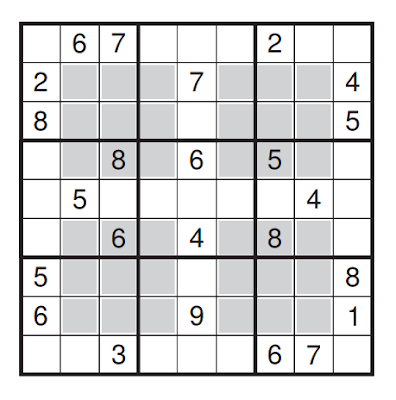 This windoku is tricky and uses some good techniques which everybody should know. I expect experts to zip through this, however beginner may feel this hard.


Apply classic sudoku rules. Each of shaded four 3x3 regions must contain each digit from 1-9 exactly once. 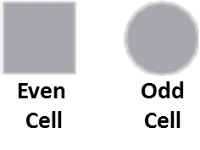 This is 100th Sudoku of this blog. Hope you like this. Please solve and provide feedback.

RULES:Please read all the rules carefully as there may be slight changes in some rules.
Grid:The grid contain four 9x9 sudokus assembled in one big 18x18 Sudoku. Please note that all 4 sudokus are independent of each other. So it is perfectly all right to have same digits adjacent to each other at boundaries. Be careful while solving.

XV : Normal XV rules but there is no converse rule, that means if X or V appears, it will just sum to 10 or 5 and has no effect on any other part of the grid whatsoever.

Quadruple : Normal Quadruple rules, however boundary can be decieving

Odd Even : Normal Odd Even rules.  This is how Odd E…